Your clothes dryer saves the family vast amounts of time and energy. It adds quality of life that would have been unimaginable in previous centuries. It is also perhaps one of the most overlooked items in the home, when it comes to proper care and maintenance - until now! Guelph and the surrounding areas can now boast one more business as a draw to living in the community: the Golden Triangle Dryer Vent Wizard. Nothing is quite as uniquely valuable as the services they offer.

Why call on Golden Triangle for all your dryer maintenance needs? "Three percent of residential fires begin in the dryer, " owner and licensed technician Patrick Stradiotto cautions. "That translates to thousands of fires, hundreds of injuries and even deaths, and millions of dollars in property damage. Gas and electrical dryers both have heating elements, and lint is highly flammable. Fire follows its path of fuel, which in a dryer is lint. Over time, lint and other debris get clogged in the system's duct line and elbows and those are opportunities for fire."

Patrick also strongly advises against foiled or nylon plastic accordion venting, as pools of lint inevitably get stuck in the ridges of the accordion. Backing the dryer as close to the wall as possible can form buckles in the accordion, preventing proper airflow and trapping lint. "I view my role as an important one," Patrick notes. "I bring venting up to building code and I educate the homeowner why this is so important." He cites one instance of a nine-year-old home in which lint got packed directly into the ceiling drywall, or another example of a homeowner who complained it took three 70-minute cycles to finally get the clothes dry. Sound familiar? "Fortunately, that dryer needed nothing more than a simple cleaning - much cheaper than acquiring a new unit," he says. "The exit points were completely clogged. In that scenario, lint was backing up into the system and it was hazardous. A thorough cleaning and it was functioning beautifully and safely!"

When Patrick comes to your home, he does a full inspection of your dryer's system and diagnostics. "My focus is to look for a 'sight unseen' situation, and the tools I use are specialized," he says. "I have an advanced brush system with a number of different heads, which literally scrubs the interior of the line. In most cases, I use a HEPA vacuum system to ensure no lint is circulated back into the home during cleaning." After repair or cleaning, Patrick installs rigid or semi-rigid piping, similar to the piping used in heating vents. "It's the same heavy material, in which fire can be contained in the piping," he explains. Patrick also uses heavy-ply vent taping on seams and joints, clapping venting when required.

Patrick notes for piping that runs over 25 feet, booster fans might be the answer, which forces airflow, so critical to dryer systems. "Otherwise, I don't recommend it for shorter piping lines; only for excessive lines to the exit point," he advises.

Other reasons demonstrate that regular annual cleaning of dryer vents is on a par to cleaning your furnace annually. "You'll save money on utility bills with a dryer that runs efficiently," Patrick asserts. "You save on clothes, which excessive drying wears down, and you'll extend the life of your unit. And besides reducing fire hazards, dryer vent cleaning restores proper airflow to your dryer, preventing other dangers, such as carbon monoxide poisoning and unhealthy mold growth."

Dryer Vent Wizard was first established as a franchise in the united states in 1994, and is now in Canada. "There are only four of us nationwide," Patrick says. "Two are in Ontario, one in Vancouver Island, and a fourth location coming soon to Calgary. I absolutely love what I do - a career change, after many years in corporate retail sales. I especially love that my services keep families safe. Education is power and a vital part of what I bring homeowners and tenants." 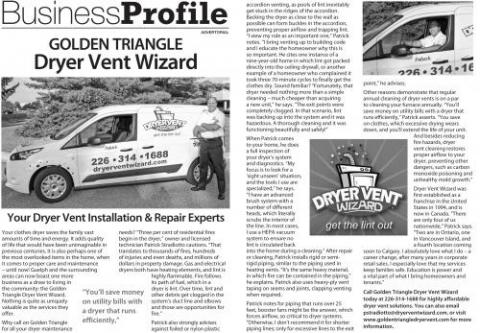 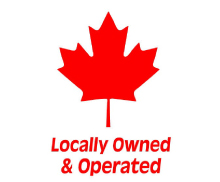